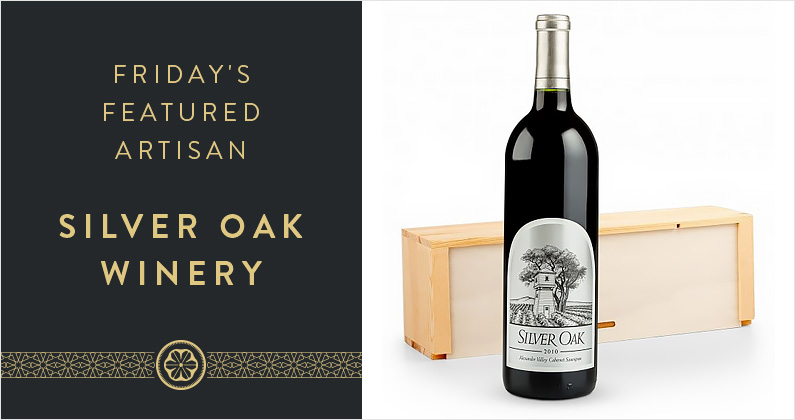 We don’t know about you, but we’re looking forward to having a glass of red wine tonight to cap off the long week, and Friday’s Featured Artisan Silver Oak Winery is one of our very favorite California cabernets. Silver Oak’s production began over a handshake between two friends – Raymond Twomey Duncan, a Colorado entrepreneur who invested in California vineyards, and a winemaker named Justin Meyer. The duo had a bold vision: to focus only on the cabernet sauvignon varietal, age it exclusively in American oak barrels, and make it cellar-worthy for decades to come. They converted an old dairy barn into a winery in Napa Valley and produced their first vintage of only 1,100 cases in 1972.

Over the next three decades, Silver Oak’s popularity skyrocketed as it consistently collected rave reviews. Their Alexander Valley and Napa Valley cabernets sold as quickly as they were released from the winery and became quite a hot commodity on restaurant wine lists across the US. Eventually, Justin Meyer retired and sold his stake in the winery to the Duncan family, who owns and operates Silver Oak to this day.

In 2006, a sweeping fire destroyed the historic winery in Oakville, Napa Valley. It was an emotional, difficult time for the entire Silver Oak family, but they were determined to rebuild, and the sense of loss was soon replaced with the excitement of an innovative new state-of-the-art winery. Today, Silver Oak grows on over 400 acres in Napa and Alexander Valleys. In 2015, Silver Oak became the first North American winery to own and operate an American oak cooperage (a cooperage is a barrel factory), giving them full control over the quality of their aging barrels.