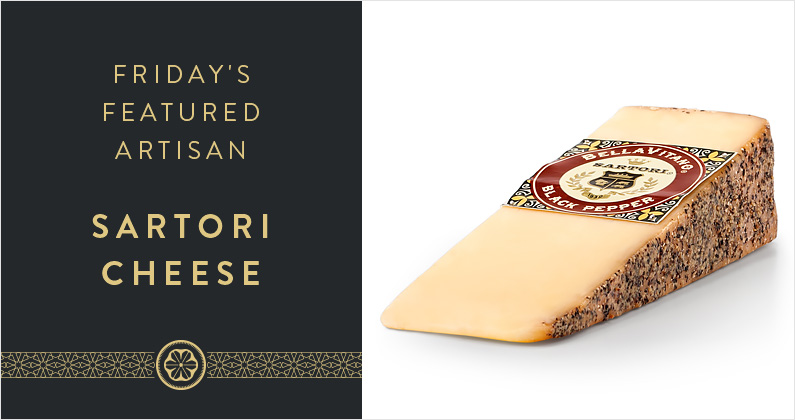 Friday’s Featured Artisan Sartori Cheese is a fourth generation, family owned and operated artisan cheesemaker with a passion for specialty cheeses and unique recipes that have been handed down for many generations. In the early 1900s, Paolo Sartori set off for America as an Italian immigrant aboard the Finlandia. While on board the steamship, he worked his way to the upper decks and struck up an unlikely friendship an Italian Count who started a cheese company in Minnesota, and invited Paolo to come and work for him. It was there that Paolo Sartori learned the business and art of cheesemaking, and in 1939, he moved to Wisconsin and started his own cheese company that is now simply known as Sartori Cheese. Today the company is in the hands of Paolo’s grandson Jim Sartori, and celebrated its 75th anniversary in 2014.

Sartori is most known for their BellaVitano, a cow’s milk Italian farmstead cheese with a nutty, fruity taste that’s also available in a number of different flavors including merlot, balsamic, raspberry and our personal favorite here at GiftTree, black pepper. Starting out like Parmesan, it has a creamy, rich texture with light fruity notes and a sweet and tangy finish. When you bite into a slice of BellaVitano, there’s a slight crunch that comes from calcium crystals that form as the cheese ages. GiftTree is proud to carry Sartori Black Pepper BellaVitano cheese in a number of our Artisan Cheese and Charcuterie gifts, and we hope you get a chance to indulge in this delicious cheese!