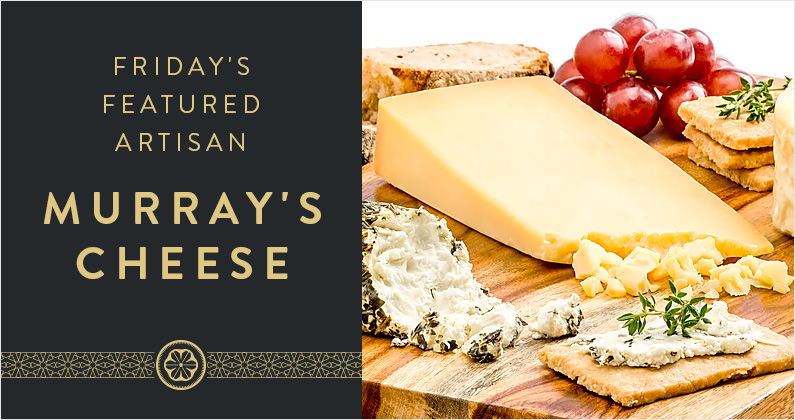 If you’ve ever been inside a Kroger, Ralph’s or Fred Meyer supermarket, you’ve probably seen their stand – a blazing red sign stamped with delicious-sounding adjectives like “savory”, “aromatic”, “toasty” and “farmstead”, along with a bold yellow logo that proudly declares Murray’s: We Know Cheese. And boy, is that right. Friday’s Featured Artisan is one of our favorite cheesemongers and one of the very best in the business, Murray’s.

A small Greenwich Village shop in 1940, the original owner Murray Greenberg had the simple dream of being a part of the neighborhood’s food scene as a dairy wholesaler. When he retired in the 1970s, he sold the shop to his longtime clerk, Louis Tudda, an Italian immigrant. In those days it was a butter and eggs shop with a selection of block cheeses, catering to the Italian enclave of Bleecker Street. While standing in line at Murray’s one day in the 1990s, a customer named Rob Kaufelt overheard Louis Tudda say that he was thinking of closing the shop down. Rob made an offer to buy the store and Louis accepted, making him the third (and present) owner of one of New York City’s oldest cheese shops. Soon after buying the storefront, Rob began traveling the globe seeking new cheeses that no American had ever heard of, and bringing them back to the United States.

From humble beginnings as a 300-square foot shop, to a flagship store in Grand Central Market, a 50-seat restaurant and wine bar, their own network of state-of-the-art caves where cheeses are aged to perfection on Long Island, and 140-cheese stands at Kroger markets throughout the country, Murray’s sells a whopping 800,000 pounds of cheese every year.

The mission statement of Murray’s is clear: to find the most delicious cheeses on Earth, and “Bring the best cheese to the largest possible number of people.” GiftTree is proud to be associated with the Murray’s family. In our partnership, the expert cheesemongers at Murray’s curated three gifts of decadent cheese: each one uniquely themed to reflect the palates of France, Italy or Europe. Click on any of the images below to check them out on GiftTree.com!

What’s your favorite type of cheese? Tell us about it!