4 Gifts for Nerds Who Have Everything 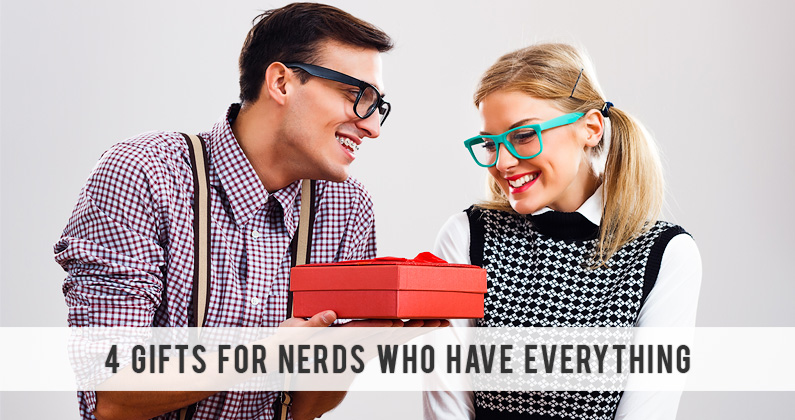 Think about it, we all have at least one friend that could be classified as a nerd. Someone who went to an Avengers midnight showing or who annually declares their love for their local Comic-Con. Well, the word “nerd” has evolved throughout the years. It may have been considered a derogatory term back in the day (never to this writer!), but nerd-culture has infiltrated nearly every interest. Nowadays, it is a title that many wear with a badge of honor!

And heck, May 4 is even celebrated. “MAY the FOURTH be with you.” Get it?

Some other examples of how nerdy we have become…

So what happens when you need to send a gift to a nerd? And what happens when that nerd has EVERYTHING already? Are there any nerd-specific gifts that may be appreciated more than others and not yet sitting on their desk?

Find our top gifts for nerds who have everything, whichever type of nerd exists in your life, below!

He feels the breeze caress his neck, blowing from east to west. Looking to confirm his suspicion, the golfing enthusiast bends down and picks out a few blades of grass. They initially resist his pull, but they finally give in. He sprinkles them up effortlessly into the air and watches them dance amidst the wind. East to west.

The hole is probably 110 yards away.

He pulls out his leather bound golf log and sees “Jackson Nicklaus” engraved on the front cover. He cracks a smile. His girlfriend gave him that nickname when he finally got his first par.

And he’s going to stick his approach and one-putt to get another par.

With his leather bound golf log tucked into his back pocket, Jackson addresses his ball, takes one last glance at the 18th hole, and swings.

Sure, beer nerds can sometimes be called “beer snobs” but it’s a big, huge beer world that we’re all living in. And it’s nice to have someone who knows what they’re talking about!

Someone who knows their IPA from their lagers. Someone who can describe your personality by a particular “hop” attribute.

And sometimes the funkiest beers (did you know Rogue has a bacon maple donut beer?) should best be shared via a beer flight.

Well, look no further than the personalized wooden beer flight from GiftTree! A great gift for any beer snob, ahem, I mean nerd, that can even be personalized! You could even write “Snob” on it…but that’s not really recommended.

Who’s Jared, you may be asking?

Jared’s the guy who tells you that you should be drinking 2 liters of water every day. Jared ran his 5th half-marathon last weekend and tagged you in Facebook to join him for the next one. Jared recommends you check out that vegan bar in Portland for its killer happy hour and nutritional yeast breaded tofu. You haven’t had it yet? Jared’ll meet you there today after work because Jared is a big-time health nerd.

Jared would LOVE his own personalized aluminum water bottle.

You could get “Jared” engraved on it, or “Runner” or even “Health Nut.” Jared would love any of these options, but he would prefer the green one.

If you think about it, we’re all science nerds.

We’ve retweeted something from the NASA Twitter account. We’ve watched hours of Star Trek growing up and dreamed of having our own holodeck.

And who hasn’t pretended to speak Klingon and had imaginary fights with that crazy-looking Klingon weapon!? Which, for the record, is an edged weapon with a curved blade with handholds and it’s called a bat’leth.

So for the science nerd who has everything (including a replica Serenity ship), what better gift than to give them the stars? Or, rather, a star. With the GiftTree Name a Star Gift Set, you can do just that! It includes everything necessary to receive a “deed” for a particular star and instructions on how to find it in the night sky.

As for names, the possibilities are endless. Confuse everyone and go with “Earth.” Go ultra casual with your favorite coffee drink “Vanilla Soy Chai Tea Latte.” Use a random string of letters and numbers that only you will remember “B32NM66.” Or even rock Klingon with “lojmIt yIpoSmoH!” which means “Open the door.”

Regardless of the name, they’ll love the fact that there is a humongous ball of gas light-years away that they were able to name. And that you made it all possible.

The number one rule for people so passionate about their interests and hobbies that they classify themselves as a nerd: make a sincere effort and show them you appreciate their passion! Nerds should be celebrated and with any of these four gifts, they will properly receive recognition.

Stumped by gift ideas for any particular type of nerd in your life? Let me know in the comments below and let’s figure it out!